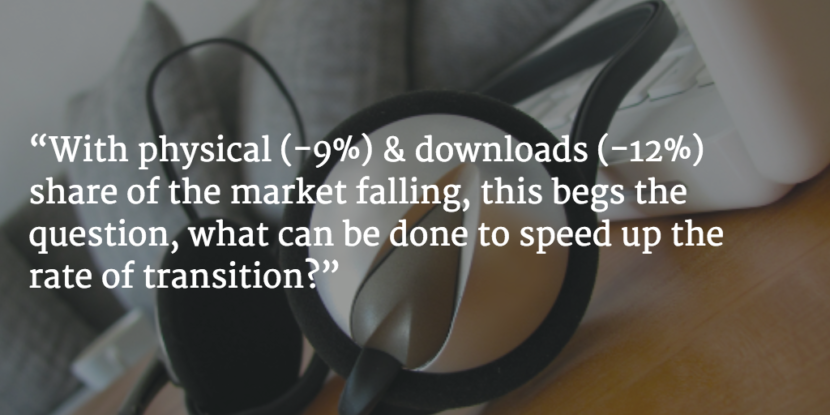 There is no doubt that the streaming model will continue to grow and become an even more dominant force in music consumption in 2015. Only a few weeks ago it was reported that streaming revenues in France have overtaken that of download revenue and it’s only a matter of time before the rest of us follow suit.

Last year industry revenues from streaming rose by £114.7m, a year-on-year increase of almost 50% (with subscription services rising to £86.6m).  However, it must be noted that when looking at the industry as a whole,  the share of revenue from streaming is still relatively small and has not yet reached it’s full potential. With both physical (-9%) and download (-12%)  market share falling, this begs the question, what can be done to speed up the rate of transition? Have we got the pricing model right? We all waited with baited breath for the launch of YouTube’s Music Key (which is currently in Beta), but is it priced too high for it’s intended target market? Is a Spotify subscription too expensive for the casual listener to take a punt? 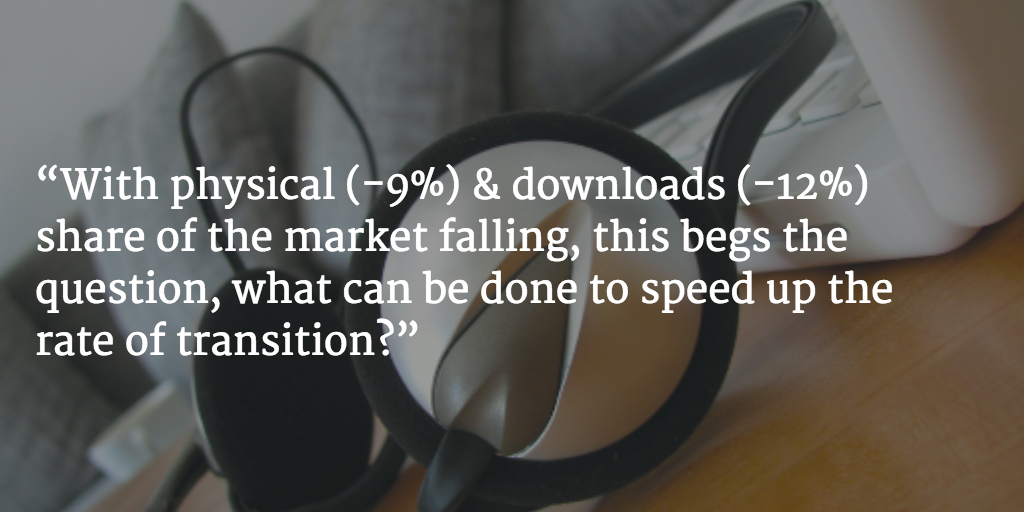 Only the time will tell and yet content restrictions, pricing models and the limitations of cheap portable devices are concerns that stretch beyond?? the realms of the music industry alone. Recently I wanted to watch a football match between two huge Premiere league football teams (Manchester City and Everton in the FA Cup), the same fixture the previous season is said to have determined the result of who lifted the Premier League trophy, but this match was not being televised and was not even available to view online. It was a lost opportunity for both clubs, the league and it’s official bodies to make a lot of money and yet this circumstance is not exclusive to this match or indeed football. The very same thing occurs every week in the UK (and without doubt the world) with lesser teams not being covered in the mainstream media. Ignoring the red tape, when we live in a world where the ability to stream and broadcast online is so cheap, and piracy is rife, why is it possible to stream a football match illegally but not pay for it when these matches are being recorded anyway? The same problem occurs in music with a lot of content that’s available in the public domain (be that B-sides, live recordings, remixes etc) simply not available to consume legally on streaming services.

The average ‘premium’ monthly subscription to a music streaming service (such as Spotify, WiMP, Deezer etc) in the UK costs £9.99 (or £119.88 PA) yet the average annual spend per music consumer is around £30. Surely these figures alone justify a cheaper paid tier? Yes, there are freemium models but we live in a world of portable? consumption. People don’t want to only listen to music when they are tied to their PC, they want it on the train, in their car and more importantly when they have no data at all!

The question is, how do we turn more casual listeners into streaming consumers? Well thanks to recent celebrity endorsed stories in the press, numbers have been on the increase. Taylor Swifts recent departure from Spotify saw the largest rise in subscribers in the service’s history and Jay-Z’s bid for the company only a few weeks ago is likely to have a similar effect. The more difficult dilemma is how we turn the casual freemium user into a paid subscriber? For me the answer is simple, the price.

YouTube recently launch the Beta of it’s Music Key, the service allows users to watch music video content from the platform offline (and also includes Google Music as part of the bundle). Although I’m a little confused as to why Music Key is limited to music and not YouTube as a whole, what confuses me the most is it’s price. The average age of YouTube’s audience in the UK is 18-24 year olds, with the most music on the platform being consumed by those aged 13-19. However, with the service being priced at £9.99 ($9.99/€9.99), surely this prices them out of the market before they have even got started?

What strikes me most? about streaming in general, is that while we are in this transitionary phase,  it’s the early adopters that are being punished by the current pricing model rather than the companies picking up the slack. Is the industry yet again hurting the pockets of those that matter the most to it? After all it was the backlash against the industry and rise in piracy felt in the late 90’s/early 00’s that was both a product of the industry’s failure to keep up with modern technology and fan’s fatigue with paying excessive prices for overpriced merchandise.

What does this mean for the future of streaming? Could it be that if prices of streaming services are not reduced then the transitionary period we are currently in is likely to take longer? It would appear that this maybe the mindset of Apple / Beats as their streaming service is rumoured to be cheaper than that of Spotify and others platforms leading the market. It’s also a theory shared by Psonar who buck the monthly subscription platform in favour of a ‘pay as you go’ offering and also a rejuvenated Guvera who offer ‘access to millions of tracks at no cost thanks to our generous advertisers’.

One things for sure, we will only get a complete picture of the power of streaming when more users  adopt the technology, by whatever means it takes. Currently only one third of the world’s population is online, imagine the possibilities when one of the other two thirds join the party!