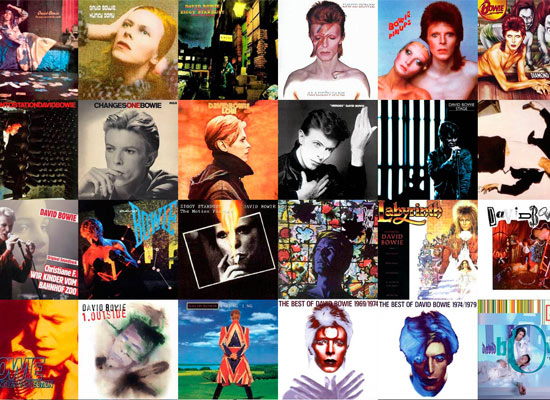 Earlier this week David Bowie died, he had already died many times before (through his reincarnations and musical transformations), but this time it was for real. Bowie died of an aggressive cancer only a few days after his 69th birthday; release day of his new album ‘Blackstar’. Little did we know at the time but Tony Visconti, producer and long-serving collaborator, has since revealed that ‘Blackstar’ was Bowie’s “parting gift” to his devoted fanbase.

Throughout his career David Bowie carried an air of mystery wherever he went; in his chameleon like sound, in his constant visual reinvention and in his performance. In a world where it’s commonplace for musical artists to be within social grasp of their fanbase 24/7 it’s hard to imagine how an artist like Bowie could be birthed in the internet age.

Modern day comparisons of household names who constantly reinvent are few and far between and all seem to pale in significance when compared to the great man. Lady Gaga is one of a handful who can’t stand in the same place for too long, but it’s hard to imagine listening to one of her records 30 years from now. A quick look the ‘The Countess’s Twitter profile reveals that Gaga, like many other musicians, was a fan herself. Others pop artists with stature that come remotely close in terms of reinvention are perhaps Madonna and Prince, both making their breakthrough pre-internet.

What the internet gives in relation to interacting with and understanding an audience it certainly seems to take away in terms of the cloaked mystery that surrounded rockstars of the past. When I first started going to gigs pre-internet, or certainly before artists used the internet in the way they do today, the expectation of the unknown was was part of the fun. We knew what the band sounded like on record but other than the odd bootleg barely had an understanding of how they would sound live, what they would look like etc. we only knew how they were perceived in the media and printed press and that wasn’t the real them! You would have to actually be there. With my fond memories of those early shows of what comparatively are fairly standard issue rockstars, it’s hard to fathom what it was like when my mother saw Ziggy Stardust arrived from whatever planet he was living on to play Hammersmith in 1973!

Although Bowie had a social presence late in his career it was rare for anything to be posted in his own voice or that he would use social media personally. But it was great to see how he took to the internet, or didn’t, around 2013’s surprise album ‘The Next Day’. We had not heard of the man for 10 years and then he dropped a 14 track album completely out of the blue! It was the man we loved being as mysterious and brilliant as ever.

This element of surprise was also something that surrounded what would become his final album release and untimely (or even artistically timed) death. ‘Blackstar’ is currently heading towards the top of the charts in both the US and the UK. Rather surprisingly if the album secures the top spot on the Billboard 200 it will be Bowie’s first ever number 1 album in the United States selling a rumored 130,000 copies.

Bowie will take his brilliantly mysterious persona to the grave with him and it’s unlikely there will ever be another one like him, but maybe it’s meant to be that way. The stars are looking bright tonight.