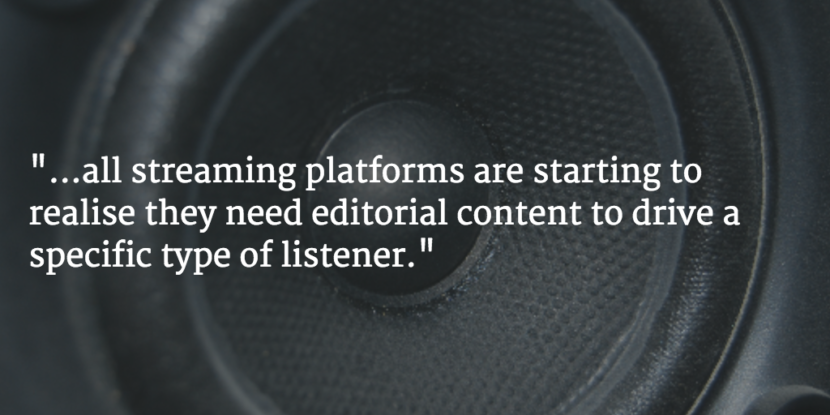 A few weeks ago rumours were starting to circulate about the impending launch of Apple’s new streaming service. The music industry has been waiting with bated breath ever since Apple acquired Dr. Dre’s Beats streaming platform for $3 billion at the close of last year. One of the more interesting developments is the Apple service being strongly rumoured to not include a freemium tier (something which all of its competitors do). With this in mind, it’s interesting to contemplate what streaming services may offer in the future, once what platforms bring to the market in a wider sense stabilises. If platforms were to shut the door on the freemium user, could they been seen as another form of cable TV?

If the uptake on a non-freemium platform was to be a success one can only imagine what the boosted revenues might bring. More editorial content and placements for exclusive content? Journalist and industry tastemaker acquisitions (such as Zane Lowe)? Higher streaming rates? More content exclusives for single platforms? We shall see. 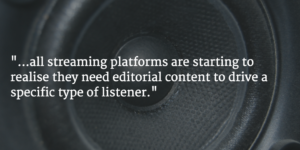 What can be learned from the exclusive content that has been obtained by Tidal (premiering Beyoncé’s performance video for ‘Die With You’, first exclusive play for Rihanna’s ‘American Oxygen’ etc.) and Apple’s recent partnership with ex-Radio 1 DJ Zane Lowe (and rumored acquisition of top Radio 1 producers James Burse, Natasha Lynch and Kieran Yeates) is that all streaming platforms are starting to realise they need editorial content to drive a specific type of listener. Maybe these listeners are the ‘super fans’ that encourage others? Their views appear to be shared by Google, whose Google Music streaming service recently introduced human curated playlists at centre stage on the apps homepage. Algorithms are impressive, and getting better all the time, but you need the perfect combination of technology and the human touch to really strike gold.

This desire for editorial content is fascinating and goes against the grain of download stores of the past, where reviews have been driven by the consumer. But exclusive content does not stop with the written word – let’s face it, consumers are drawn to these platforms firstly to listen. Spotify was the early adopter of exclusive content with its long-standing ‘Spotify Sessions’ live series. These are few and far between, however, and it would be great to develop a method whereby these could be rolled out more freely for artists of any size. The model is an interesting one, though, and it’s not hard to imagine this extending to full-length studio albums either licensed or paid for entirely by a single streaming platform. Content, be that licences or paid for, could be exchanged for editorial content or higher algorithmic placements. Could streaming platforms be the record labels of the future?

The way in which content will be premiered via these platforms is likely to cause repercussions for other parts of the industry. What will happen to online press officers when they are pitching for un-monetised premieres across websites/blogs vs. monetised streaming services which (for a small windowing period) are likely to attract far more ears and eyeballs? It’s an overlap we are already seeing in regard to video premieres, with press officer pitches overlapping with those of digital distributors.

The recent launch of Vessel, whose business model allows fans access to exclusive music video content days ahead of its rivals for only $2.99 per month for its ‘early access’ users, is in more of a similar vein to Netflix and other film and documentary streaming platforms than more traditional music services. Will we see platforms combining documentaries, film and music exclusives in the future? Although yet to be proven a success, Vessel’s business model further underlines the value that music platforms see in exclusive content as an asset to win over listeners from other services.

The bundling of content is another fascinating similarity between both the television and the music businesses. It’s almost impossible to buy a Sky TV package without adding a landline and internet package for a nominal fee. This is mirrored by music streaming platforms as they partner with mobile phone operators, such as Deezer and Orange, Spotify and Vodafone etc.

If Apple’s streaming service is launched imminently it will be interesting to see how the next few months play out. If what appears to be a highly editorially-driven model proves to be a success, it’s going to be interesting to see how existing platforms adapt or follow suit. Content started with man and it appears we aren’t through with it just yet!

3 thoughts on “Will Streaming Be The New Cable TV?”