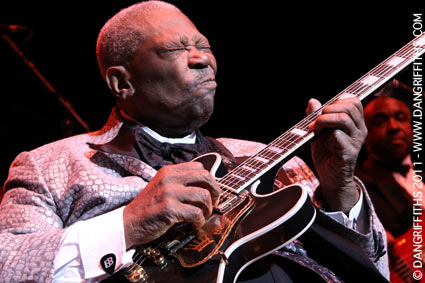 Last night I returned to the Royal Albert Hall in London to photograph the master of Blues B.B. King. He was grest fun to photograph pulling lots of faces and talking inbetween songs. He arrived onstage after his band had opened with an instumental throwing plectrums into the crowd. You would had never have guessed that he’s now 85!

Riley B. King known by the stage name B.B. King (“B.B.” short for Blues Boy), is an American blues guitarist and singer-songwriter acclaimed for his expressive singing and fluid, complex guitar playing. Rolling Stone magazine ranked him at #3 on its list of the ‘100 greatest guitarists of all time’. According to Edward M. Komara, King “introduced a sophisticated style of soloing based on fluid string bending and shimmering vibrato that would influence virtually every electric blues guitarist that followed.” King has been inducted into the Rock and Roll Hall of Fame.