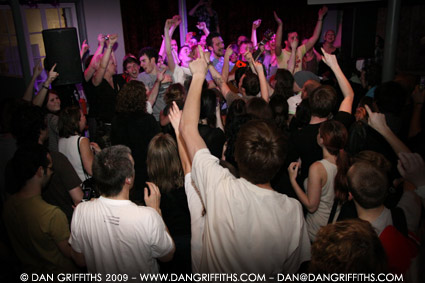 Another week, another Frank Turner gig! Again, I was experimenting with the Canon 50D’s live view mode. The show at a new venue in London called The Flower Pot was rammed so I stuck to a corner of the room with the intention of shooting a single frame which captured Frank’s interaction with the audience. Typically as the final song (‘The Ballad Of Me And My Friends’) of the evening began and the best crowd reaction of the night ensued prompting a stage invasion, the battery on the camera died! Luckily I managed to salvage one of the last shots I took. View the image large on black.