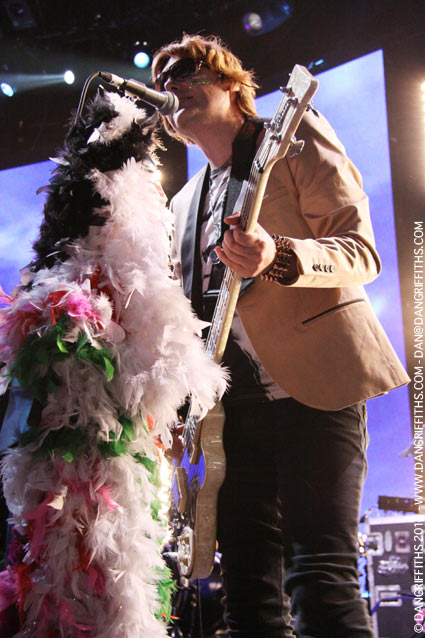 Here’s an image I took of Nicky Wire of Manic Street Preachers on Sunday (3rd July 2011) when they performed at the Roundhouse, London as part of the iTunes Festival. Support came from Dry The River and Ramona. Click on the image above to launch a slideshow from the night.

The Manics released their debut album, Generation Terrorists in 1992. Their combination of androgynous glam punk imagery, outspoken invective and songs about “culture, alienation, boredom and despair” soon gained them a loyal following and cult status. The band’s later albums retained a leftist politicisation and intellectual lyrical style, while adopting a broader alternative rock sound. They have had eight top ten albums and fifteen top ten singles. They have reached number one three times, with their 1998 album, This Is My Truth Tell Me Yours and the singles “If You Tolerate This Your Children Will Be Next” (1998) and “The Masses Against the Classes” (2000). They have also won the Best British Album and Best British Group accolades at the BRIT Awards in 1997 and 1999, and were lauded by the NME for their lifetime achievements in 2008.  Their ninth studio album, Journal for Plague Lovers, was released on 18 May 2009 and features lyrics former member Edwards had left behind to the band weeks before his disappearance. Manic Street Preachers released their tenth studio album, Postcards from a Young Man, on 20 September 2010.