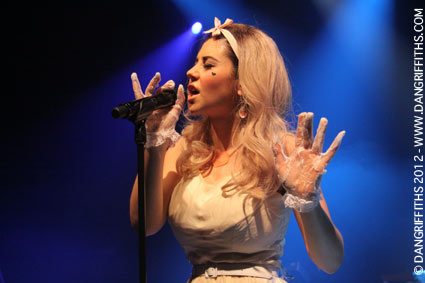 These shots of Marina & the Diamonds (Marina Lambrini Diamandis) were taken at the Shepherds Bush Empire on Sunday the 26th February. To launch a Flash slideshow of the evening click either the image above or below.

On 8 August 2011, Diamandis uploaded a new video to her YouTube page titled “Part 1: Fear and Loathing”. In an interview with Popjustice, Marina explained the whole concept of “Electra Heart” with the album to be under the same title and “Fear and Loathing” as an album track, and to be released on iTunes on 25 September. However this will not be an official single. The high concept video for it sees Marina slowly transforming into the character of Electra Heart, a guise Marina says “epitomises and embodies the lies, illusions and death of American ideologies involved in the corruption of self.” but will however not be an alter-ego as Marina says it is too “clichéd”. Asked to describe just what Electra Heart is and stands for, Marina told Popjustice: “Electra Heart is the antithesis of everything that I stand for. And the point of introducing her and building a whole concept around her is that she stands for the corrupt side of American ideology, and basically that’s the corruption of yourself. My worst fear – that’s anyone’s worst fear – is losing myself and becoming a vacuous person. And that happens a lot when you’re very ambitious.” The second song, “Radioactive” produced by Stargate premiered on BBC Radio 1 on 22 September 2011. It was released on iTunes on 30 October 2011. Further developing the Electra Heart concept “Part 2: Radioactive” the official music video for the single premiered. On her first video chat with fans, Marina revealed that Electra Heart would come out “the same month as the previous album,” which came out in February. However, Marina has since tweeted the ambiguous statement “Some news. Electra Heart is not being released in February…”, it was later revealed in February 2012 that the album would be released on 30 April 2012. 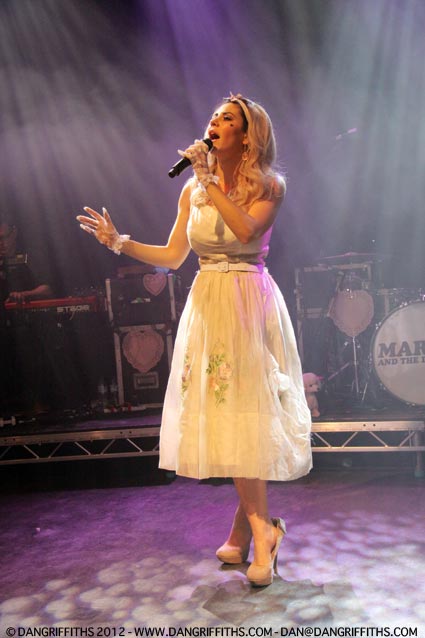