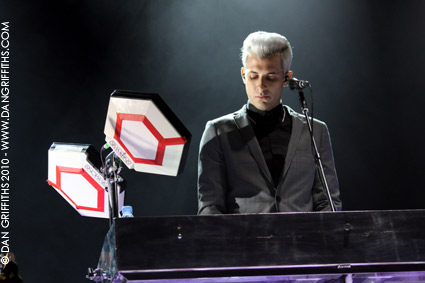 Last night I was at the Hackney Empire for a special show to launch the release of producer Mark Ronson’s new album ‘Record Collection’. Guestlist disaster meant I was stuck waiting by the guestlist for over an hour but eventually made it into the photography pit 10 minutes before stage time! Ronson performed with his new band The Business Intl and we joined by guest vocalists that feature on the record later in the evening. To see a selection of images that I took on the night click on the images above to launch a slideshow.

The first single from Ronson’s new album, ‘Bang Bang Bang’, which featured rapper Q-Tip and singer MNDR was released on 12 July 2010, where it peaked at number 6 on the UK Singles Chart, giving Ronson his fourth Top 10 hit. The single also saw success on the Irish Singles Chart, where it peaked at number 18. The second single from the album, ‘The Bike Song’, was 19 September 2010 and features Kyle Falconer from The View and Spank Rock. The album was released on 27 September 2010.