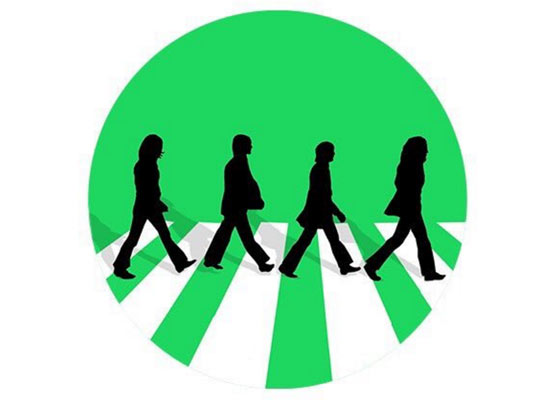 What happens on social media when the biggest band in the world put their catalogue on streaming services? Well, this is a question I tried to answer a few weeks after the fab four’s 13 albums (and 4 compilation albums) were added to the likes of Spotify, Apple Music and Deezer on 24th December 2015.

Before I delve into the impact that the addition of their catalogue had in the wider realms of social media, let’s look at their more obvious chart success around the festive period. Eleven of the band’s albums made their way back into the Top 200 chart in the UK and in the table below you can see how these broke down in terms of percentages of physical, download and streaming. It’s worth noting that The Beatles ‘1’ compilation had recently been re-released with the band’s videos available on DVD audio for the first time, hence the physical sway for this release. Before it’s re-release in June 2015, ‘1’ was already the sixth best-selling album of the 21st century in the UK having sold over 3.1 million copies.

The week prior to the band’s albums being added to streaming services only ‘1’, ‘Sgt Pepper’s Lonely Hearts Club Band’ and ‘Abbey Road’ were featured in the Top 200 album chart. 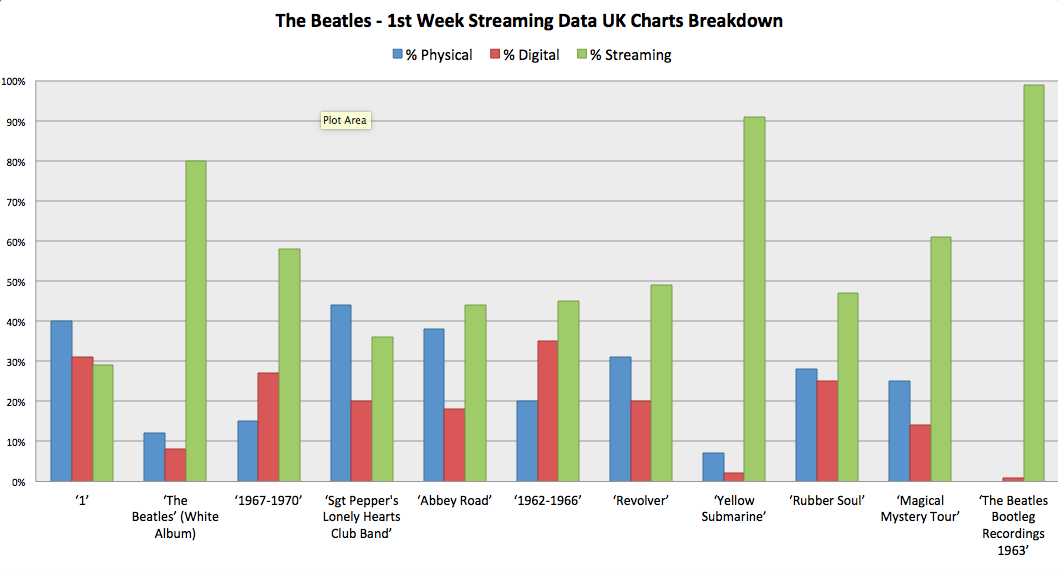 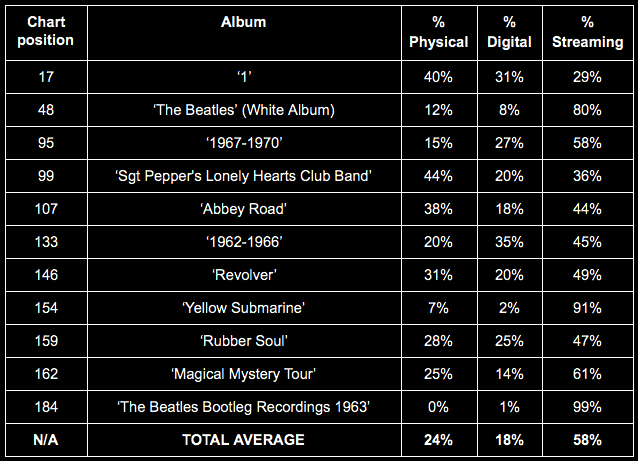 Breaking these figures down, chart registered ‘sales’ of the main albums featured in the UK album chart were boosted by an average of 58% due to the inclusion of streaming data. Without the inclusion of ‘1’, this figure rose to a staggering 67%!

The week following streaming launch, ten of those albums (‘1’, ‘1967-1970’, ‘Sgt Pepper’s Lonely Hearts Club Band’, ‘Abbey Road’, ‘1962-1966’, ‘The Beatles’, ‘Revolver’, ‘Rubber Soul’ and ‘Yellow Submarine’) still remained in the Top 200. The only steep decline in chart placement in the second week of streaming data came from ‘The Beatles’ (The White Album) which fell from number 48 to number 166. This record could be seen as a great Christmas gift for Beatles aficionados which may have contributed this. In fact when looking at the chart data in the first few weeks, you could have been forgiven for thinking that at least a handful of The Beatles’ albums would remain in the UK Top 200 for the foreseeable future. However, from the graph below, you can see the albums began to decline dramatically in chart position post Week 2. 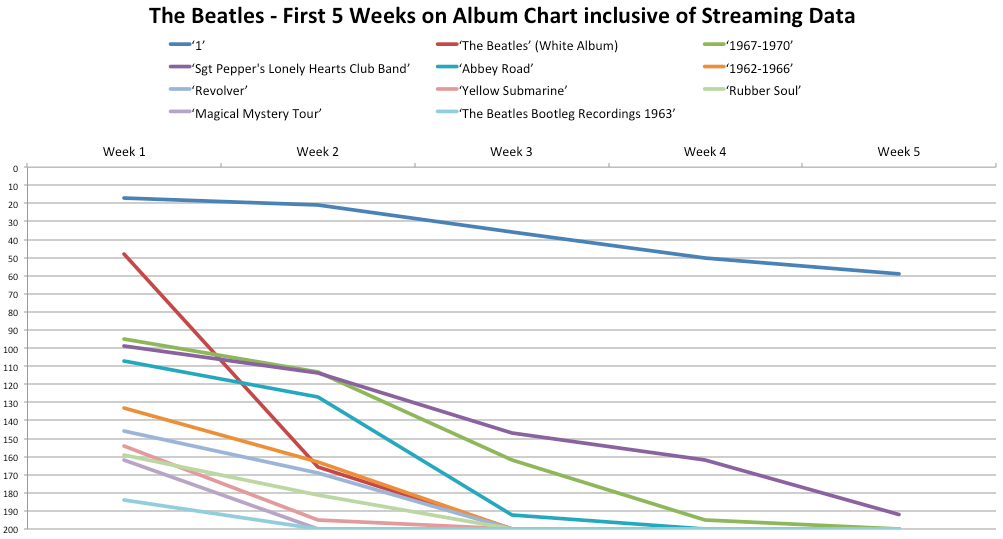 Now let’s take a look at what happened on non chart eligible streaming service YouTube – the only streaming service which already had The Beatles’ catalogue. What is potentially surprising is that the band had a huge spike in their YouTube views, peaking at 1,277,101 views on the 24th December. This was part aided by the addition of ‘The Beatles Now Streaming’ video which was added to the band’s official YouTube channel on 23rd December resulting in 215,876 views on the 24th December alone.

Interestingly, it would appear that The Beatles videos were removed from music video service Vevo on the 17th September 2015 ahead of their launch on streaming services and the re-release of the ‘1’ album on DVD featuring 27 of the group’s videos. Eight videos have since been re-addded to Vevo.com and the bands Vevo controlled YouTube channel over a period of 2 months with the latest being a restored and remixed version of ‘Revolution’.

In the first week The Beatles albums were added to streaming services, followers on the newest of the band’s social profiles, Instagram, grew a staggering 130% in comparison to the previous week’s growth. Facebook (70%), YouTube (39%) and Twitter (11%) also experienced significant growth on previous weeks. Twitter’s minimal growth of only 11% was perhaps the most surprising given the activity that was happening on the platform. 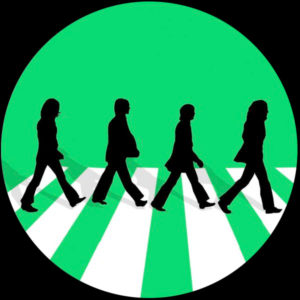 On Twitter (a platform largely embraced by 18–29 year olds), Spotify appeared to rule the majority of Beatles related conversation. This was partly thanks to the rollout of a Beatles ‘Abbey Road’ style emoji that was added to any Tweets that used the hashtag #BeatlesOnSpotify and a series of beautifully animated artwork videos. The Spotify hashtag was estimated to have reached over 2 million users at the time of writing with similar hashtags for Deezer (#BeatlesOnDeezer 11,745), Apple Music (#BeatlesOnAppleMusic 1,736), Tidal (#BeatlesOnTidal – 808) and Google (#BeatlesOnPlayMusic – 0) paling into insignificance. Kevin Brown of Spotify has since said that they racked up 70 million streams within their first 3 days on the platform and I’m sure that awareness on Twitter had a large part to play in this.

Spotify have since released some in depth data which provides a rather interesting insight into the demographics of listeners of The Beatles on the platform. This also includes a breakdown of most popular track by age group and gender. 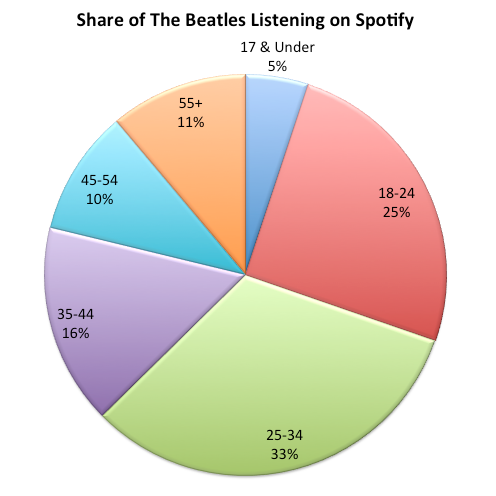 A younger demographic appears to be mirrored across both social and listener data, something which is also likely to become less pronounced as consumers habits continue to change over time.

Although it’s clear that launch of The Beatles catalogue on streaming services has not resulted in the bands music landing within The Official UK Top 200 Albums Chart on a permanent basis, what it has proven is that it’s more likely that their albums will chart in times of heightened press activity or cultural significance. It’s important to remember that the inclusion of streaming data within the Official Charts is in it’s infancy and as downloads sales continue to decrease it will be interesting to see what happens as the Official Charts Company adapts the calculation they used to determine a per-stream rate to sale. Maybe we will see further adaptations of the Official Chart rules to prevent timeless hits surfacing on a weekly basis. I guess we shall have to wait and see!